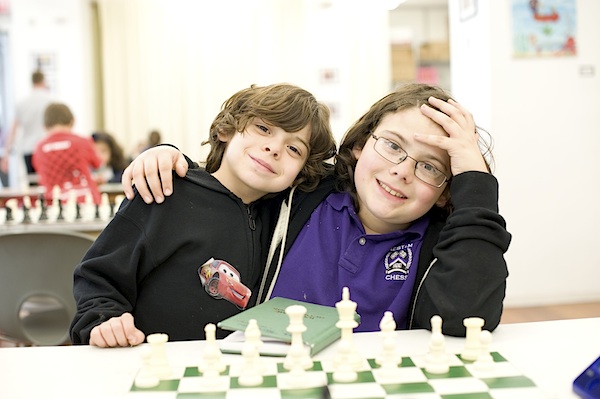 A GUIDE TO SCHOLASTIC CHESS

This publication is provided free to all schools and scholastic organizers.
It was created to help teachers and scholastic chess organizers who wish to begin, improve, or strengthen their school chess program.

The scholastic chess club combines educational and social activities.  Members come to play, to learn, to teach, and to get together with old friends and make new ones. The players — no matter what their level of skill, experience, or age — speak a common language, and one that is often not understood in other areas of a person’s life.  The rivalries are friendly; the friendships are competitive.

A club can offer a wide variety of activities. There can be speed chess or rated games, or both. Club activities can include simultaneous exhibitions, lectures, and even formal classes taught by chess Masters and Experts.

Some players who regularly come to a club won’t ever try weekend scholastic tournaments.

These avid club players may get their fill of “serious” chess by competing in a club ladder or one-game-a-lunch-period club tourneys.   Ideally, the club will cater to all types of players — recreational as well as the serious tournament players.

EVERY member is important to the success of the club.

Should You Start a Scholastic Chess Club?

Should you become involved in starting a club in your school?

Yes! It’s not at all necessary for you to be an “expert” player, or even to know how the pieces move!  Every school in the country has kids who already know how to play chess, and more who would like to learn.“No one at our school plays chess” is not an acceptable excuse.

Most of the time kids are interested in learning and only need someone to organize and supervise them.

This guidebook will help you overcome many of the problems you will face in starting a club.

If you have not already done so, you may want to find out the location of the nearest chess club or scholastic/school club.

The United States Chess Federation (abbreviated USCF) and your state chapter are the best sources of information on officially affiliated club locations, scholastic organizers and coaches in your area.

These contacts can help direct you further in your efforts to organize a club or locate other active scholastic chess programs within your area.

Other information sources include local schools, school district offices, newspapers, libraries, chess and game stores, and your local recreational office.  You might also consider contacting the county Department of Education.

By all means, you should start a club if you have some support from students and the willingness to expend the moderate amount of energy and leadership it will take to make your club a success.

Gain support from the school board, parents, your principal, and other teachers as soon as possible. Their aid will be useful later as the club becomes more active.