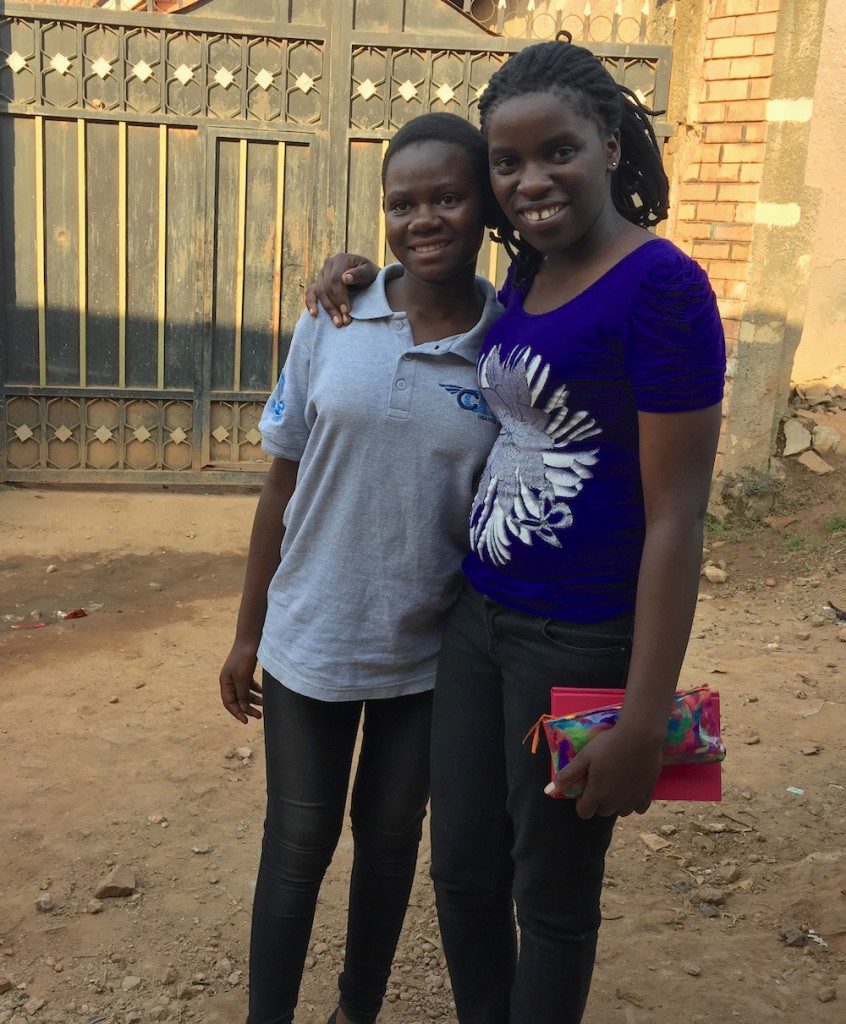 Gloria and Phiona are role models in Uganda, an inspiration to many young players, especially the young chessplayers back in Gulu who speak of them fondly and aspire to be like them. Phiona is the “Queen of Katwe” in the upcoming Disney movie, which was inspired by her life. Gloria will be representing Uganda in the upcoming FIDE World Youth and Cadet Championship which takes place in Greece from Oct. 24 – Nov. 6, 2015.

Beatriz Marinello created the “Smart Girl Chess Program” when she saw the great need and limited funding and support for the struggling chess programs in Uganda and other countries. As Chair of the FIDE Social Action Commission Chair she garnered the support of the Commission and “SAC’ General Secretary, Robert Katende, with support of “Sports Outreach”.

“Working hand  in hand we have been able to develop a Smart Girl Chess program in five centers for children who live in extreme poverty conditions.” – Beatriz Marinello 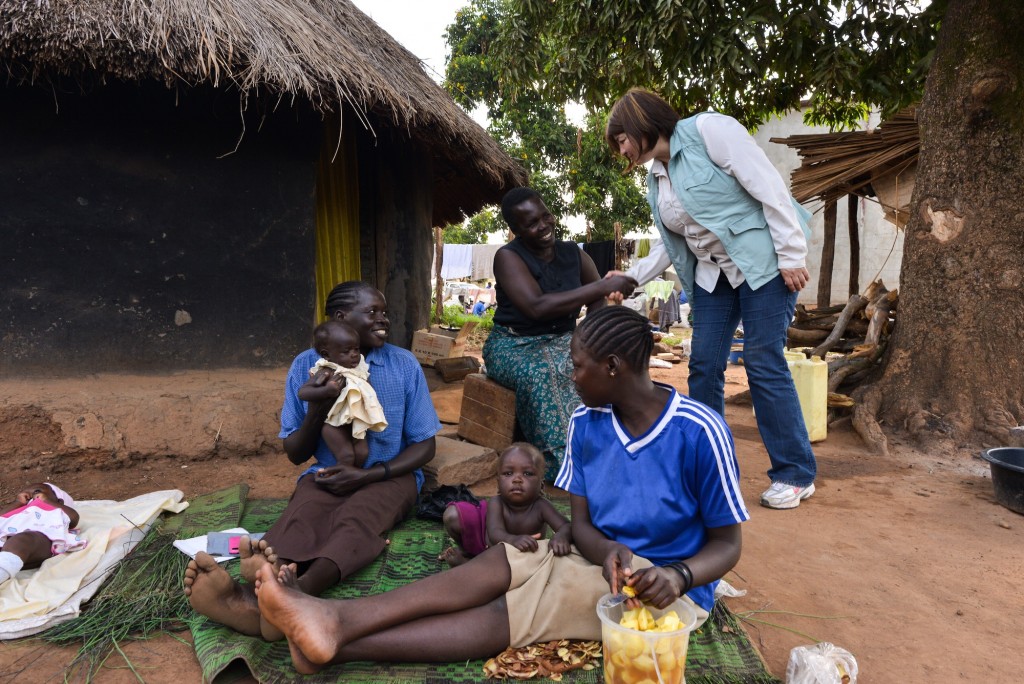 Gulu is a city in Northern Uganda that was impacted by war. Most people live from agriculture in conditions that are below the poverty line. There is no electricity or running water, however, efforts from the government and non-profit organizations such as “Sports Outreach” have made access to water possible by constructing wells within communities.

Women and children are often the only ones seen walking long distances to carry much needed water back home; the water is transported in plastic jugs carefully balanced on their heads.

The beautiful children of Gulu opened their hearts to chess and we are hoping that through this initiative we can empower them to embrace education and good decision making skills.

The only way that we can transform these children’s lives is by providing educational and social programs. In Uganda education can be costly for people who are struggling to feed their families. Above the 6th grade level, education needs to be paid for; we want to give these children a chance by connecting them with people who can help pay for their education.

The Social Action Commission and Beatriz Marinello would like to reach out to people with good hearts from around the world that are willing to help sponsor a child who desperately needs help to pay for their education and boarding schools.

We met one young girl in the ‘Smart Girl’ Program who was no longer in school because her family could no longer afford the school’s fee, however, she never missed her chess class.

She said, “I never miss chess. I hope that one day I can continue with my school studies. But, for now, I at least have the game of chess.” 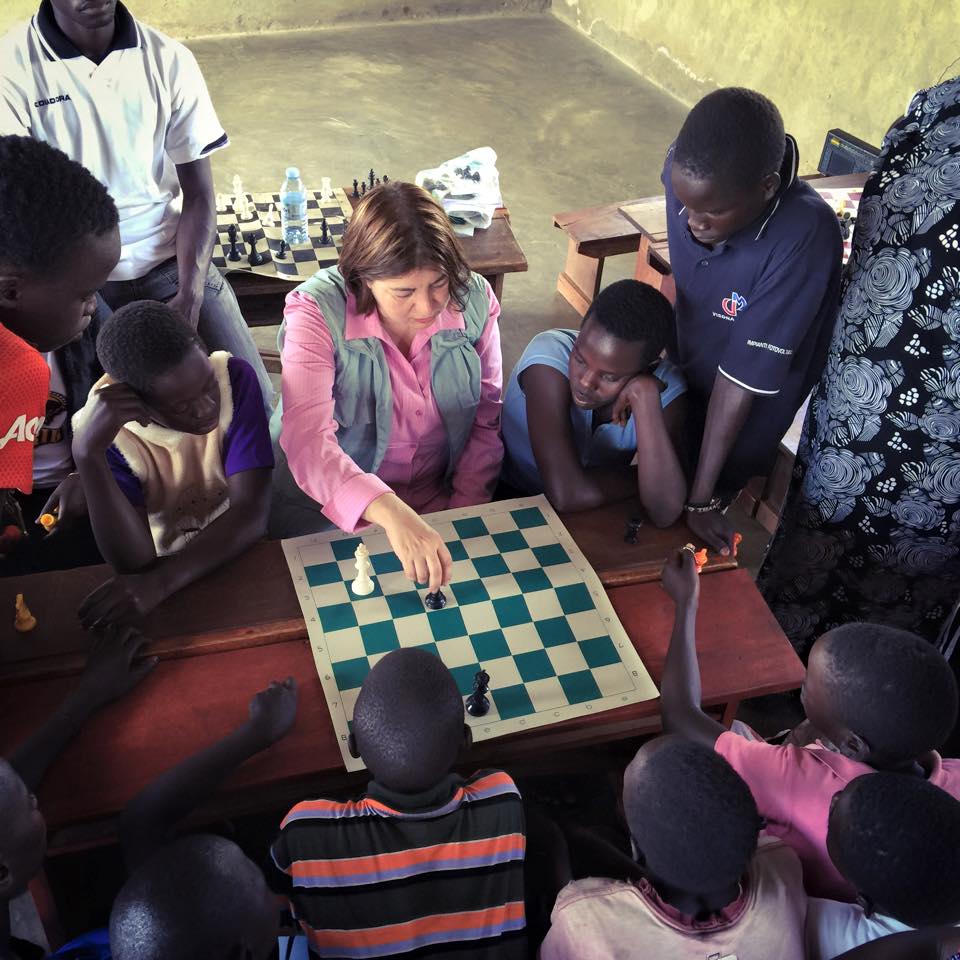 Beatriz goes over game strategy with the young chessplayers in Kampala, some of whom are already playing in National Tournaments despite their challenges.

After traveling 14 hours by car, Beatriz insisted on visiting the kids despite the long hours traveling. If the children were waiting for her, she was not going to let them down.

We arrived at the Chess Academy in the heart of the slums in Kampala. Resources are scarce, but, that doesn’t stop young chess players from focusing on their game. At times many players spend 5 hours a day at the Academy; it has become a safe haven for the kids.

Shown below is Richard, playing a game with Beatriz. Richard is a tall and talented 14 year old player, unbeknownst to him, he is playing the game of his life. He doesn’t know it yet, but, Beatriz Marinello has personally agreed to sponsor him and pay for the cost of 4 years of school for him. 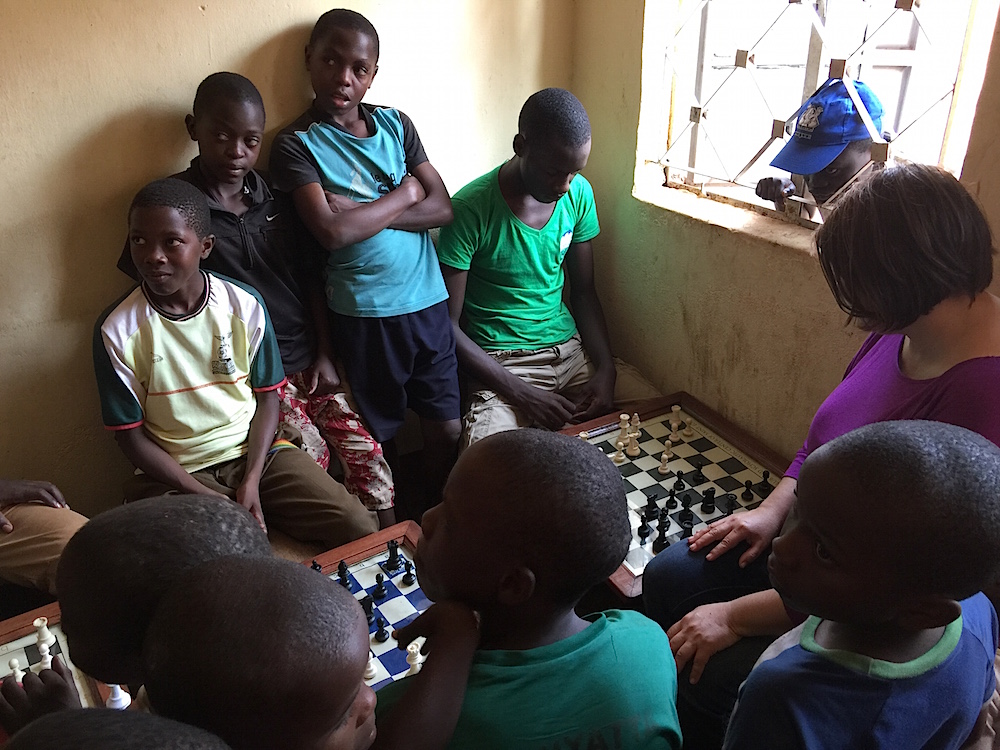 The children used to share chess sets or take turns in order to play due to the lack of equipment. We are pleased that this is no longer the case. Apart from the sets the Social Action Commission gave the centers, our Chairperson facilitated a donation of 54 sets from the Marshall Chess Club in New York City and personally delivered them to the children. The children were very happy when Beatriz read the letter the club sent them. Thank you Marshall Chess Club!

The Chilean Ministry of Social Development and the World Chess Federation (FIDE) signed the Social Initiative Chess Agreement to facilitate the integration of children, youth and vulnerable senior citizens through the game of chess. The aim is to promote strategic thinking and intergenerational exchange in vulnerable sectors.

The FIDE Social Action Commission Chair, Beatriz Marinello, helped facilitate the relations between the World Chess Federation and the Government of Chile to make this historic agreement possible. It is through initiatives like this that the Social Action Commission is helping make a difference across the world, from its projects in Africa, Chile, Trinidad and Tobago and Nepal. In forming strong and positive relationships, we can all make a difference in the communities across the globe.

With the signing of this agreement pilot chess programs will be implemented in the regions of Valparaíso, Tarapacá, and Los Lagos, with nine communities in total, for about eight months, with an investment of approximately $85.000 US dollars.

With this project, the Ministry, through the Solidarity and Social Investment Fund FOSIS; the National Service for Senior Citizens, SENAMA; and the National Youth Institute, INJUV, seeks to strengthen the social fabric of communities and create opportunities for encounter through chess, that can strengthen the dialogue between generations.

The Minister of Social Development, Marcos Barraza said, “We all help build Chile, and with initiatives such as the Social Initiative Chess Project, it helps us make this happen every day, expanding the possibilities of development and integration between generations.” The Minister goes on to say that this effort is part of the ongoing concern of the Ministry of Social Development, “to promote equal opportunities for people and vulnerable communities.”
Vice President of the World Chess Federation, Beatriz Marinello, stressed that this is “a unique project that has never been implemented before in the world, one whose development will be documented so that Chile may serve as an example for other nations that would like to reproduce it.”

National Director of SENAMA, Rayen English also stressed that “the participation of senior citizens in inclusive settings, where dialogue with other generations can occur, is an opportunity for the transfer of knowledge between generations, cognitive stimulation, new roles, and the validation of such experiences, forming favorable and enabling environments for the aging.”

For his part, the executive director of FOSIS, Andrés Santander, said that this initiative aims to strengthen local communities, “generating participation of its members, and developing a space where the game of chess can be learned, played and practiced, while promoting a dialogue between generations and an exchange of experiences that can enhance relationships, capacities and interactions.”

National Director for INJUV Nicolas Preuss “This is another important instance in which the Government of Chile seeks to strengthen the participation and integration of children and youth through the game of chess, where strategic thinking leads us to obtain our objectives by seeking solutions to problems or difficulties.”
To mark this event, officials and about 30 participants, seniors, youth and children, participated in a game of human chess, at the Plaza of the Constitution.

The project aims to promote active aging in senior citizens through interaction during chess play with others; for children it is a practice that strengthens their ability to develop strategies; while for the youth, it increases active participation, solidarity and commitment to their community.

The Importance of Interacting with Other Commissions

We’re interacting with many other FIDE commissions, including Chess in the Schools, Events, Women’s, Disabled, and Trainers Commissions. We welcome collaborations with other International Organizations that share similar goals. The following seminars are connected to the Chilean government in conjunction with the Ministry of Social Development.

In Chile, three FIDE Trainers Seminars were held in: Santiago, Concepcion and Iquique. GM and Senior Trainer Reinaldo Vera was the Lecturer and the Assistant Lecturer was WIM and FIDE Trainer Beatriz Marinello.

In order to develop chess we need to reach out to the local community and provide them with skills and the motivation needed to support the creation of new programs and existing programs. Therefore, it makes sense to include Seminars that offer training for Trainers and Organizers.

The seminars attracted over 30 participants from Sierra Leone, Uganda, Kenya, Rwanda and Burundi.

This is the first time that these two types of seminars are held in East Africa and presented an opportunity for participants to acquire skills related to organizing high level events as well as nurturing and developing chess talent.

The seminars started with a brief opening ceremony at which several of the leading local press were represented.

Beatriz Marinello awards a gift from the Marshall Chess Club in New York City for the children of Uganda who participate in tournament play.

Participants attended the seminars free of charge, a sign that FIDE is focussed on growing capacity of chess organization and training in Africa.

Beatriz also visited Social Action Commission supported projects in Gulu, Uganda from the 24th to 27th of August 2015. During her visits to the centers in Gulu, Beatriz distributed a total of 47 chess sets to the 5 centers in Gulu whose children participate in the “Smart Girl Project” and 7 sets with 5 extra boards were given to the Uganda Chess Federation for the children to use in tournament play, these were received by the UCF Director of Development – Robert Katende, Technical Director – Stephen Kisuze and Vice President of Uganda Chess Federation Olga Robinah Namwanje.

The First Chess Tournament for Children in Group Homes and Orphanages is held in Kathmandu, Nepal

The first chess tournament for children residing in orphanages and group homes was hosted in Kathmandu, Nepal in November 2014. The Social Action Commission is happy to have helped fund this event. 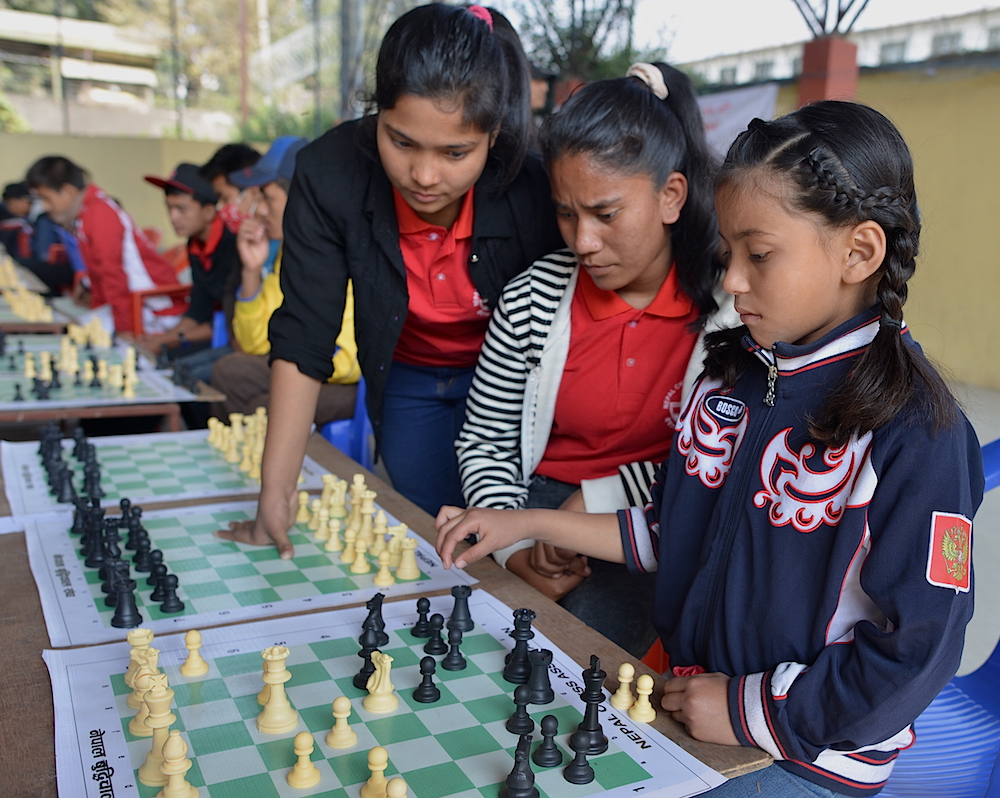 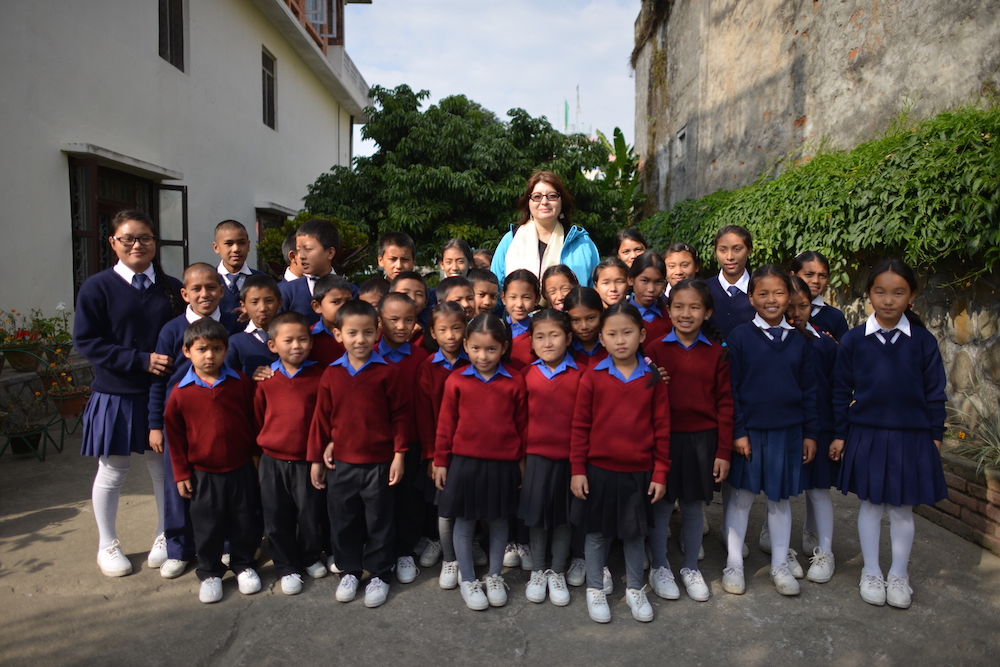 Our Chair, Beatriz Marinello, met with the Minister of Sports and discussed the collaborative efforts being made to reach out to the children in orphanages and group homes.

Organizing tournaments such as these gives the children an opportunity to participate in events that are normally closed to them. Beatriz attended the Opening Ceremony and the tournament.

During her visit to Nepal, Beatriz also visited many orphanages. The great need that exists in Nepal is painfully obvious. Visits to the Group Homes were both moving and revealing.

The general feeling among the children, despite their difficult struggles for ones so young were optimistic. Little did we know that not long after this chess tournament, the country would be hit by a devastating earthquake.

The children of Nepal must face more challenges. With help from many countries, Nepal is on the road to recovery.  Our thoughts are with the Nepalese as they work hard to rebuild the destruction left by the earthquake.

The Social Action Commission’s projects have created a positive impact in the targeted communities. They continue to work to develop programs for chess as a tool for social improvement.

Find out more at sac.fide.com

Photos and Media Credits / No use without written permission:

All Photos by Dora Leticia, Copyright Protected, except as indicated below.

Photos for Chile section of report are courtesy of the Chilean Chess Federation and subject to their Copyright.